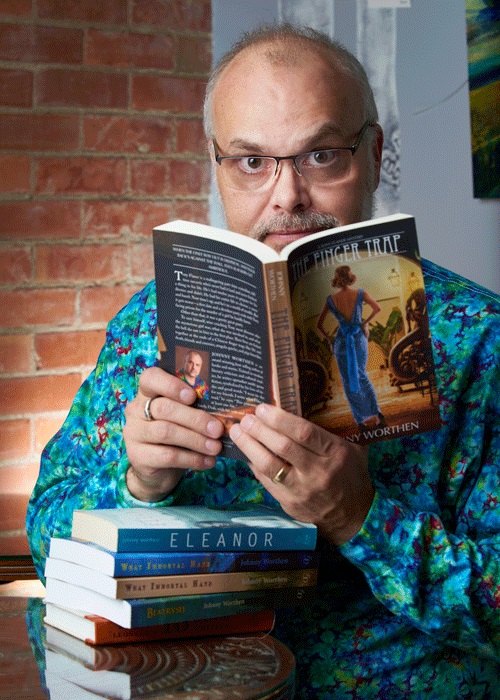 JOHNNY WORTHEN is an award-winning, multi-genre, hybrid, tie-dye-wearing author, voyager, and darn fine human being! Trained in literary criticism and cultural studies he earned his Bachelor's and Master's degrees from the University of Utah. Beyond English on a good day, he speaks Danish and reads Latin. He is a Utah Writer of the Year.
An avowed Deconstructionist, Johnny writes up-market stories from the inside out, beginning with theme and pursuing an idea through whatever genre will best serve it. So far he has published fiction novels as mystery, young adult, comedy, urban fantasy, horror and science fiction, both traditionally and independently.
A frequent presenter and panelist at writing conferences and fan conventions, he is active in local communities of artists and writers. A long-time volunteer for the League of Utah Writers, the state's oldest and largest writing organization, he has served several high positions of leadership there, including President from 2018-2020.
When not writing his own stuff, Johnny edits professionally for a small dark fiction press in Los Angeles and teaches Creative Writing at the University of Utah as an Associate Instructor. He lives in Sandy, Utah with his wife, sons and cats. There's also a lawn.

"Johnny was the perfect writing instructor. He provided great information and structure to start on a novel. And he created an awesome atmosphere where everyone could share their ideas and drafts and receive feedback and support from him and classmates. I would recommend this class to anyone from a serious writer to someone who's just curious." - Katherine N.

"This was the first writing class I've ever taken and was really impressed. Johnny Worthen had a lot of straightforward really good information and tips and delivered them with infectious energy and humor. The online format actually worked very well and I never felt intimidated or shy about sharing my ideas or writing homework. I am really impressed with how much I learned in this class. I went in with just a vague idea for a novel and left 7 weeks later with a complete outline, practice in writing clues, scenes and dialogue, and the feeling that I can actually do this! I am now two chapters in and starting to feel like an actual writer!" - Laura H.