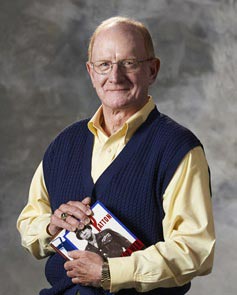 Steve is a long-time lecturer on World War II history at Georgia Tech, Morehouse College, The University of Utah, Brigham Young University, and venues throughout the Salt Lake Valley, and has been an Osher instructor for the past four years. Steve served 26 years in the Air Force and his father 26 years in the Army. The combination of a half-century of military exposure and experience plus years and years of research and study yields a solid foundation for discussions of things military.

Fascinated by the decisions made during the war, Steve’s interest and lectures focus not only on the what, where, and when of World War II events, but to a far greater degree on why the events happened at all. Why did we invade at Normandy? Why did we not do so until three years into the war? Why were we able to fool the Germans? Why was Eisenhower Supreme Commander? The list goes on and on.

And if you think it is exciting to discuss and answer these questions in a packed classroom, think how exciting it is to do so as you walk the five beaches, the incoming tide lapping at your feet. Suddenly, classroom discussions become very real. You feel the same wind, taste the same salt, see the same bluffs as did the 156,000 troops who went ashore on the longest day.

Steve is a true story-teller. He loves telling World War II stories, especially the stories of June 6, 1944, and his audiences never seem to tire of listening.